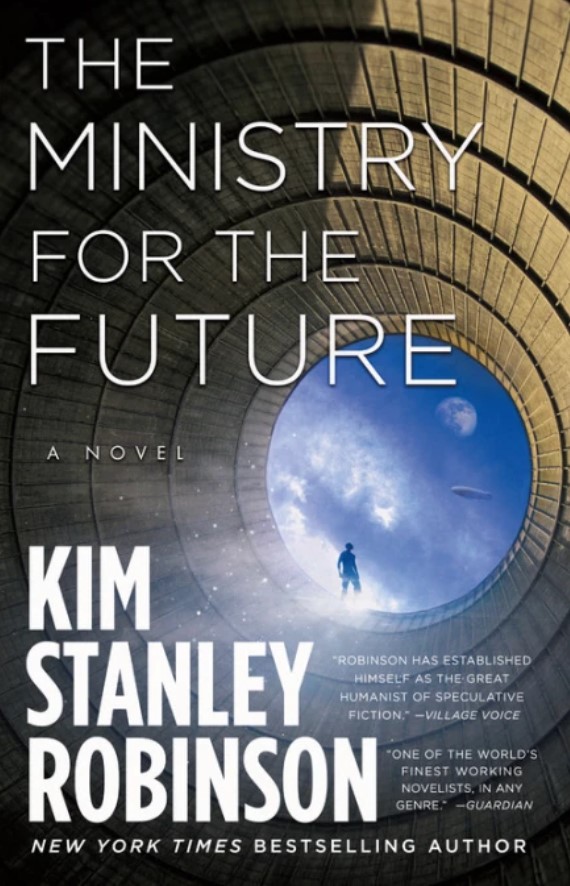 I have, as per my demographic and political / cultural leanings, been reading Kim Stanley Robinson’s climate novels since he started writing them. But I’ve never been moved to review one before The Ministry For the Future.

Read this book, and not just because it imagines a successful path forward. Read it because it does so without down-playing the climate danger, and because it holds the vision of a “post capitalist” world in proper equipoise with the defining necessities of crash decarbonization. Robinson may be just a wee bit optimistic about the manageability of the climate system tipping cascades that now seem to be on the horizon, but in the context of this book, I think this is OK. When you’re done with the opening scene, you will not feel moved to claim that the arc of The Ministry is in any way based on soft-pedaling.

This is not a proper review. Just three points.

1) Read this book, particularly if you’ve been underwhelmed by “Climate Fiction”. In this regard, note this recent opinion piece on Cli Fi. I cite it because it’s erudite in a useful sort of way, and because it gives me a chance to suggest you might be better off reading The Great Derangement, Amitav Ghosh’s non-fiction book on the challenge the climate crisis poses to literature, than Gun Island, the Ghosh novel it cites and discusses.  And because, when it comes to Robinson’s work, it references only New York 2140, which allows me to quickly opine that The Ministry is a more important book.

2) The Ministry is unabashedly supportive of The Paris Agreement. This is significant because Robinson is a man of the left, and because it has long been routine on the fringes of the old-school climate left to attack the Paris Agreement as a useless and confusionist “false solution,” when in fact it was, for all its limitations, a major breakthrough.

I don’t want to exaggerate here. Most people—think of Sunrise, or all the people working to coordinate the Biden and Sanders strategies — could give a fuck about the old-school radicalism in which we have only demands, and no real sense of how we’re going to close the gap between the possible and the necessary.

But closing this gap is the point , and this is only going to become more obvious in the years ahead, where we have to both fight Green New Deal style battles at home and then return to the international  negotiations to win a framework within which they add up to something grand, something we might as well call a global Green New Deal.

This will inevitably mean melding the Green New Deal’s national visions with an international mobilization architecture, which will necessarily and unavoidably be erected on the foundations laid down by 1992’s Framework Convention on Climate Change and 2015’s Paris Agreement.

Robinson’s thoughts on all this are pretty interesting, and he’s laid them out nicely in an interview just published in Jacobin, by Derrick O’Keefe, entitled Imagining the End of Capitalism With Kim Stanley Robinson.  Like so:

“The Paris Agreement is crucial. It’s a major event in world history. It could turn into the League of Nations, in which case we’re screwed. Or it could turn into something new in history, a way to decarbonize without playing the zero-sum game of nation against nation.”

To which I will add, from the same interview, Robinson’s distinction between the utopian project and his own:

But I would just flip it and say, it’s hard to imagine how we get to a better system. Imagining the better system isn’t that hard; you just make up some rules about how things should work. . . but the story of getting to a new and better social system, that’s almost an empty niche in our mental ecology. So I’ve been throwing myself into that attempt. It’s hard, but it’s interesting.”

I quote all this because it spotlights the problem of the transition, in a way I was surprised to see Jacobin even implicitly support.  This issue here is something  I’ve recently heard called “rapid incrementalism.”  It’s something we all need to get better at  imagining.

3) One of the key plot devices in The Ministry is the invention of a new currency, which is designed such that its value increases with the total human effort to reduce carbon emissions. Here’s the exchange between O’Keefe and Robinson from the Jacobin interview:

“DOK: A key part of getting from here to there, to a new political economy, involves the question of finance. In New York 2140, one of your characters is a Wall Street trader speculating on intertidal markets, and much of the action concerns finance and the banks. In The Ministry, even more radical measures are contemplated for putting finance at the service of a livable, non-submerged future. Where did you get the inspiration for Carbon Quantitative Easing and the rest of the transformation of finance imagined in this book?

KSR: Carbon Quantitative Easing is not my idea. I really am just a listening facility here, trying to amplify ideas. That one is out there. Recently, even Lawrence Summers — who was the treasury secretary for Bill Clinton and a neoliberal of the first order — and his think tank have been putting out stuff about some kind of CQE. So it’s been spreading quickly as an idea, and I’m glad.

But in the years since I wrote New York 2140, I learned more about the central banks and realized that nationalizing the banks, which happens in 2140, wouldn’t be going far enough. It would be great if all banks were owned by the people, and if banks were not private profit-making enterprises, that would be great — but it would only be one step along the way; it would not be enough. Because, at this point, central banks are only concerned with stabilizing money and maybe helping employment levels, and they will not do anything else unless they are under enormous pressure. They need to be changed. . .

Changing the way we regard money, that would be a step toward post-capitalism right there. If money was created from scratch but not given to the banks to loan to whatever they wanted but given to decarbonization projects first, then flowing out into the general economy — the first spending money by governments, which make money in the first place, would be targeted toward decarbonization efforts. This strikes me as a good idea, a necessary idea.”

For more on all this, see Robinson’s piece in Bloomberg Green, and start paying attention to the changing debate on global climate finance, which is taking on a bit of “Modern Monetary Theory” coloration.   And to get a sense of who Robinson is, see this nice little talk he gave in 2019 on the “good Anthropocene.”

Meanwhile, The Ministry is definitely worth your time. It’s quite a yarn, and along the way you’ll get a good dose of Robinson’s vision of transformation, of how he imagines the global elites being forced – for they are, in this story, forced – to transition the global financial system into one in which climate stabilization is actually possible. This is, I suppose, an important point. The elites in The Ministry do not heroically save us. They just, finally, do their part, which they do against the background of a manifest and undeniable emergency, and a ramifying global rebellion. There are planes falling out of the sky, and they’re not falling on their own. But that’s just another piece of the tale, which sprawls in a manner so complex and various that it is, well, almost believable.

PS (February 19, 2021).  I just found out that Stan gave me a nice shout out on a recent podcast called Outrage and Optimism.  Not that you care, but the episode is here and shout out is at about 23:00.  Note that if you really want a good interview with Stan, you should probably listen, instead, to Ezra Klein’s.